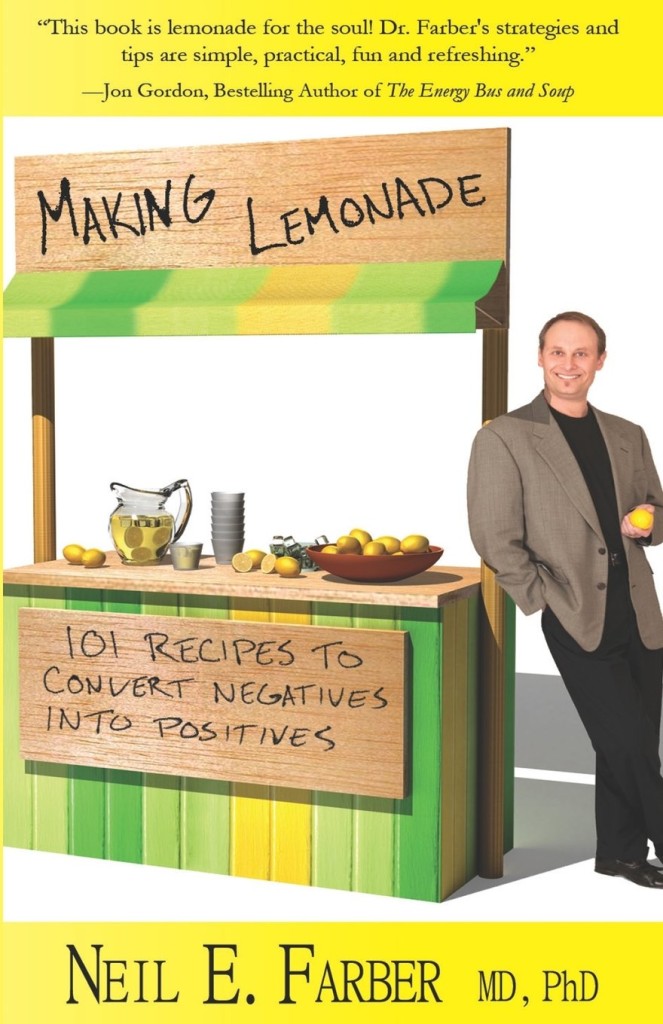 Can I Make Myself Happier?

Making Lemonade: recipes for converting negatives into positives
Positive, optimistic, happy people are mentally, physically, and emotionally healthier; they have an enhanced immune system, are more resilient, have better relationships, are more successful at work and in marriage, are more satisfied with their lives and careers, and even live longer!

Studies suggest that positive individuals may outlive their pessimistic counterparts by as much as ten years. This amazing benefit is greater than that achieved by losing weight, reducing cholesterol, controlling blood pressure, or taking vitamin supplements. I’m not suggesting that you forget about healthy living. It just so happens that positive, optimistic people are more likely to have healthy living habits.

Does this benefit only apply to people who were “born this way” or do we have the ability to become more optimistic, happier – more positive? Twin studies (comparing identical to non-identical twins) suggest that genes account for about 50% of our happiness levels. Other genetic studies show that genetic coding for the oxytocin receptor are associated with the personality trait of optimism. However, these genetic differences only predict a person’s susceptibility to become pessimistic when encountering certain types of stress. Your final disposition is still, in large part, up to you.

Several years ago, I was talking with my kids about how they could make some extra cash on the side. They came up with the idea of setting up a lemonade stand. I thought it was a great plan, especially because I love lemonade! Hard lemonade, soft lemonade, frozen lemonade, flavored lemonade, and fancy designer lemonade. I also thought it would be a good lesson in economics.

In setting up their lemonade stand they quickly realized that what looked on the surface to be an easy task, was fraught with several challenges including; how and where to build the stand, how to advertise, who would work and when, and of course, how to Make Lemonade.

It’s hard for me to think about making lemonade without thinking of Dale Carnegie’s famous quote, “When fate hands you a lemon, make lemonade.” Carnegie who was born in 1888 made his own transition from a poor farmer’s boy to the developer of popular courses in self-improvement and the author of the famous book, How to Win Friends and Influence People.

Lessons learned from setting up a lemonade stand were more than just economics. Their stand required construction that resulted in several questions. What kind of materials to use? How to pay for it? How to put it together? How to move it to the location? Other issues that arose: Do we need a business permit? What times should we be open? I’m afraid of talking to strangers. I’ll have to be out there by myself. Someone has a prior commitment and can’t work their shift. We ran out of some of the ingredients for the lemonade…

To establish a successful stand, like any business, required goal setting, being open-minded, creative, curious, hopeful, optimistic, objective, flexible, persistent, and patient. They gained an understanding of the importance of commitment, taking responsibility, problem solving, and teamwork. They conquered several fears and along the way, became more mindful and came to enjoy the process of doing rather than simply having. In undergoing this project of Making Lemonade, they realized the power of possibility and that the journey was more important than the outcome.

What initially were considered to be problems became situations. These were slowly converted into challenges, and then on occasion, they would wonderfully transform into opportunities. It was Dale Carnegie coming to life at their little Lemonade Stand.

Profitable or not, their lemonade stand was a huge success!

There are a multitude of proven techniques available to help us become more positive, happy, and optimistic. My new book, Making Lemonade: lists 101 simple recipes to help you convert negatives into positives. Some recipes will focus on ways to redefine what you think is bad. Other recipes will give you practical and useful methods to change how you act or think to convert “bad” into “good”; thereby bringing more positivity into your life.